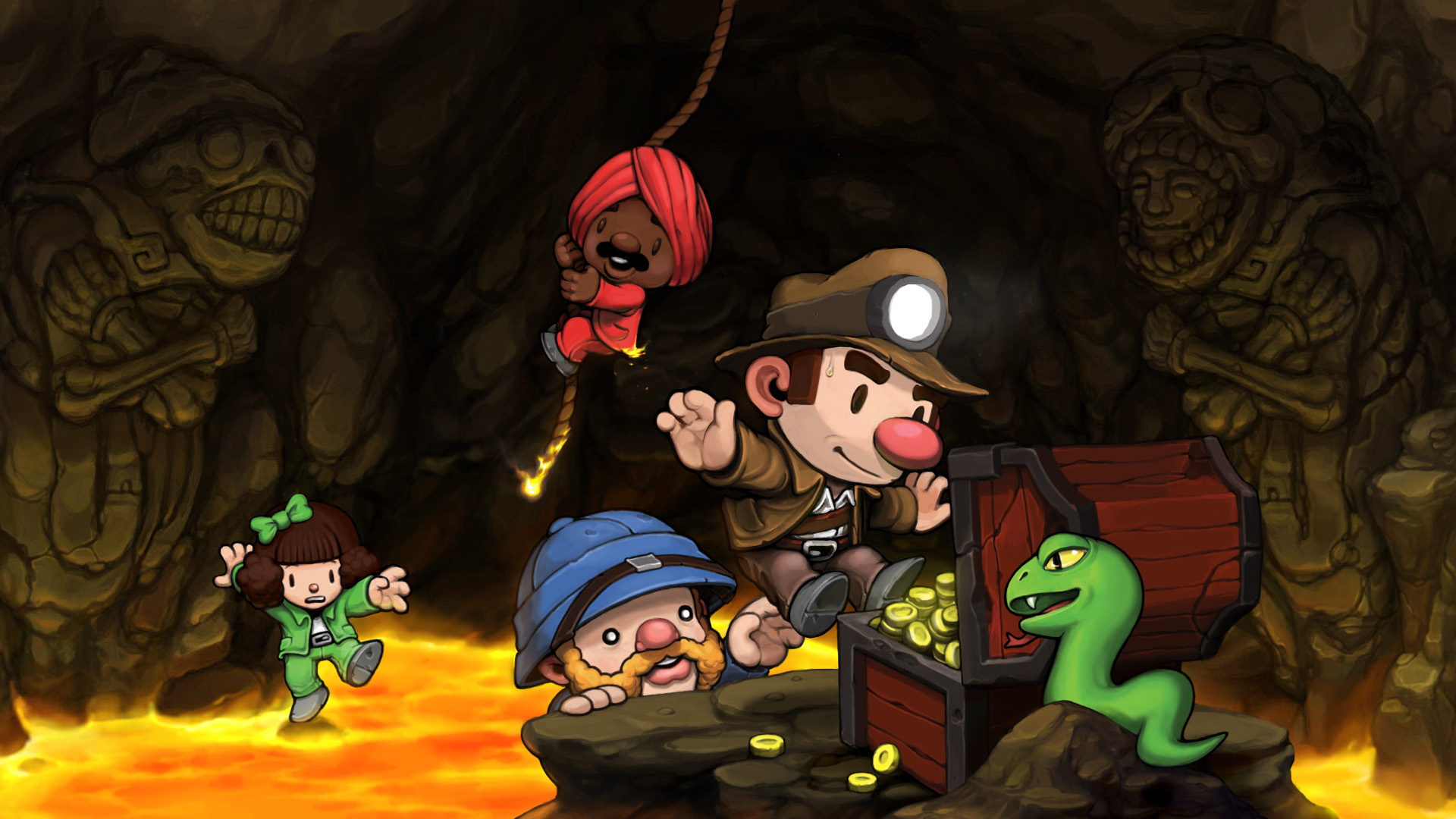 Spelunky… Boy, this game. If you don’t know what it is, then buckle up! In many ways Spelunky is one of a kind. Many games are similar, but no game is just like Spelunky. It’s controls are tight, responsive, and precise. It’s difficulty is unforgiving, but not insurmountable. It rewards creativity with success, and punishes laziness with brutal and embarrassing failure. This game can be rage inducing. It is one of the few games that can really just crush me and rile me up. There is nothing worse, than having everything go perfectly, only to watch your entire run crumble in an instant when something unpredictable happens and you’re helplessly caught in the crossfire. As an example, I was in the Ice Caves, the games third area, and I was doing quite well. I had plenty of health, and all the items I could ask for to make my run easier. Unfortunately a certain type of enemy in the Ice Caves explodes upon death, and the debris from this explosion can actually hurt you. I knew this, but had no reason to assume an enemy off screen would land on a land-mine, die, and be jettisoned across the level. And then explode sending debris into me, causing me to fly back and slide across the ice, off of a platform, and then fall to my doom.

My entire run, destroyed. It took me thirty minutes to get where I was. And it crumbled in a 600th of the time. I didn’t play for awhile after that…

But don’t let this deter you. Spelunky might be hard, and… honestly there is no ‘might’ – it is hard. and does not apologize for it. But that’s the allure of this game.

It’s hard, and mean. But damnit, you’re a badass if you can beat it.

The nerve wrackingly high stakes are what make it so great. Really. If you want to get your adrenaline pumping, get to the later sections of a Spelunky run, and start dealing with the traps, enemies, and obstacles this game throws at you. I have been playing video games for nineteen years. This game is up there as one of the most heart pounding.

Spelunky is one of the many games that falls into the Rogue-like genre.  It has a procedurally generated world – meaning it is random every time. You start off with the bare minimum needed to succeed, and are thrust into a world hell bent on murdering you and laughing at your corpse.

It shouldn’t be difficult to tell that I love hard games. I have put hundreds of hours into the Monster Hunter and Souls games, Ninja Gaiden, Dragon’s Dogma and many others. So it should be no surprise that I love games like Spelunky. Games that present steep challenges to overcome using their particular rule sets.

And that defines Spelunky perfectly. It’s a game of rules. Once you learn it’s rules, you can excel. Everything acts and reacts in a particular way. That eventually can be easier to predict and react to. Although there will always be those strange outliers where the stars align and you shoot an alien with your shotgun, it explodes and one of the chunks hits a landmine. Causing it to explode sending a rock flying at you, hitting you in the chest, sending you careening backward off of a platform. Falling onto a yeti who then throws you into a wall causing you to bounce off said wall back towards the yeti who then throws you into the same wall locking you into an eternity of pain and suffering, crushing your spirit and ending your life.
But hey, it makes for a hilarious story.

The game also has a great amount of depth, with a shockingly large amount of random “event” and hidden levels for you to find. As well as a very hard to unlock “secret” end boss that requires you to play through the game perfectly in order to attempt to beat him. I have made it to him once or twice in probably 500+ attempts. But, once you make it there. You can do it again. Spelunky is one of those games that, once you understand how it works, it seeps into your bones. You might be out of practice, but the game has conditioned you to play in a particular style that will reap success even if you’re not on your A game.

as an example of the depth and difficulty, here is what is needed in order to get to the ‘secret boss’:

-Be warned! If you don’t want to know specifics, skip the next few paragraphs.-

In the Mines (the games first area) you must find two items, a key and a chest. Inside the chest is the Ujad Eye, needed to find a hidden level in the Jungle (area two). These two items are in one of the Mine’s four levels. If you miss it you can still progress towards the secret area, but it becomes significantly more difficult.

In the Jungle you use the Eye to locate the entrance to Black Market, which is filled with items. In the black market there is the Ankh. This item is necessary for your advancement. Without it the secret area is locked out. Period. It costs 50k gold, a very large sum of money. Or… If you don’t possess the money, you can always kill the NPCs in the area and steal it (at your own risk!). But make sure you don’t die, as the Ankh will break and Revive you. But, this stops your progress because you need the Ankh for later!

Now in the third area, the Ice Caves, there is a large Moai Head, with which you cannot normally interact. However, if you have the Ankh, and die on the level it is present in, it will revive you within the Head. Giving you the Hedjet. One of the most important items in the process.

Once in the City of Gold, you have to kill Anubis again, and steal the Necronomicon.

NOW, you then have to beat Olmec, the game’s ‘Final Boss’… and make sure you kill him in the right spot, because you then use him as a platform to enter Hell.

The games ‘secret’ and true final area. Only accessible with the Necronomicon. Which is only available with the Scepter and Hedjet.. which can only be gotten if you use the Ankh in the right level… Yeah…

Now that you’ve made it to Hell, you have to ACTUALLY MAKE IT to the Final level, 5-4, and fight Yama, the king of the underworld.

As if getting to him wasn’t hard enough, now you actually have to kill him.

I haven’t been able to pull it off myself… But damn if it isn’t a rush when you get there.

I know it sounds like a lot, BUT what I laid out in the last few paragraphs is really more of an endgame objective. But it truly is very fun to try and strive for. Each time seeing yourself improve, getting just a little further with every attempt. Until finally you routinely make it to hell and kill Yama on the Daily Challenge without breaking a sweat…

I can understand why games like spelunky are intimidating. However, if you go into it with the right attitude I think that anyone can enjoy it.

This game is amazing, and I recommend it to anyone who enjoys a good challenge.
Yeah it might sound impossible, but it really isn’t. It’s one of those games that every time you die “One more run!” plays in your head. And then two hours go by and you didn’t even realize it.

Spelunky is well worth the effort it requires you put into it!